It is very difficult to describe in depth and in detail my great love for books, nevertheless I am sure that those who are true book-lovers can understand and acknowledge the kind of feelings and emotions books can inspire: that fantastic sense of immanence and overpower when entering in a new huge library, the petty curiosity of surfing through the book-shelves in somebody’s apartment, the silly delight of cherishing and peeping at a newly bought volume still in its shop-bag and the happiness when removing its shrink-wrap and then inhaling the fresh scent of ink and paper perusing its untainted pages, the pleasure of feeling lost in time while sitting comfortably and exploring colourful art-book pages in a tiny but familiar bookstore and the bliss of having unexpectedly found an old book browsing through a flea-market. As well as I am sure that real book-lovers will understand me when I say that the only sad consideration about books I can think of is the overwhelming question that I often ask to myself and that, alas! already contains a despondent answer: “will I ever be able to read them all”?

As a logical consequence I truly understand, love and strongly sympathise with Don Quixote: an extraordinary sensitive personality, a remarkably imaginative soul endowed with an indescribable delicate spirit and a rare generous heart. I am really fond of this intense and emotional man who went “mad” – albeit, can we actually and really call it madness? – because of avidly reading about armoured heroes, sweetest and candid damsels, fierce combats and noble duels and thus losing his sense of reality:

Thus consequently and eventually he, a quiet and inoffensive squire, resolved to start a brand new life as a wandering knight, facing any sort of perils with the noblest of the intents: defending the distressed ones; and concomitantly receive honour and glory:

The power of books is boundless, as the power of love, as Don Quixote does not simply find inspiration in his readings, he does not solely feel delight by recalling and quoting by heart his books and he does not merely seek for comfort when immerging himself in those written adventures; he actually finds in his beloved volumes, verses and novels the strength to face the reality, his sad reality – of course in his own extravagant way – and by either imitating or even impersonating their protagonists he is literally able to cope with and overcome the difficulties and pains that his ordinary countryside life brings along:

In truth Don Quixote’s love for books is amply counterbalanced by his household members’ hate against the volumes he covets in his library. This base and wicked hatred masterly portrays the ever existed revulsion of the uneducated and especially of the insensitive ones against literature and figurative arts. They eventually will decide – while Don Quixote is asleep – to burn almost his entire precious book collection once and for all, blaming his mental distress on the books; but in my opinion they perform this unforgivable murder more credibly for both the sake and the shame of their ignorance and absolute lack of sensibility: something to a certain extent also confirmed by observing that the chief inquisitors of this innocent volumes’ death sentence are the barber and the vicar, and their actual executioner is the house-keeper:

The “Household Inquisition” in order to complete this shameful expurgation process builds a wall where the library door was previously located; thus I can imagine and share, like any book-lover who lost his/her volumes would, Don Quixote’s panic and desolation for losing his library. When he wakes up – of course his first thought is to go to his library and meet his beloved books – he finds out that the objects of his love are not there any more or probably they never existed, which is even worse:

The grave and sad mourning of the author for the sin that has been committed sounds like a strong denounce tout court against culture enemies of all times:

Fortunately hatred – to which naturally I join also shallow ignorance or ignoble insensitiveness – against books and fine arts in general does not necessarily always bring true talents to death. On the contrary the remarkably unfavourable attitude and harsh adverse treatment of some authors and their productions oftentimes have brought to quite opposite results: making a famous martyr of a truly gifted artist and a long-lasting masterpiece of his memorable compositions:

Besides, ultimately I am firmly convinced that all those who believe that they can extinguish a true passion by simply sending far away its source, and defeat a true love by either moving its protagonist out of sight or out of reach, have never felt real passion or love at all, and for this I truly pity them:

Well known also to the non classicists and most certainly famous to a wider public for her faithfulness and her never ending thread, Penelope is still nowadays used a stereotypical example of the trustworthy and forgiving wife, a patiently loving companion who awaits in anguish and cries aloud for her husband Odysseus to return, pushing away the uncouth attempts of very many (one hundred and eight for the records…) of unappeasable suitors. 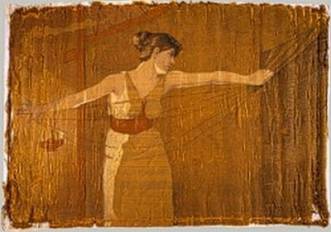 These qualities are very well described along the verses of The Odyssey and in several occasions they are reaffirmed and corroborated. First of all Penelope is often reported to be wise and witty:

with a grace divine her soul is blest,
And all Athena breathes within her breast
In wondrous arts than woman more renown’d,
And more than woman with deep wisdom crown’d;
Though Tyro nor Mycene match her name,
Not great Alcmena (the proud boasts of fame);
Yet thus by heaven adorn’d, by heaven’s decree
She shines with fatal excellence, to thee

She is also shrewd, when for instance she devises the famous everlasting thread; as well as when she uses the bed trick to prove her alleged husband’s identity:

The secrets of the bridal bed are known
To thee, to me, to Actoris alone
(My father’s present in the spousal hour,
The sole attendant on our genial bower).
Since what no eye hath seen thy tongue reveal’d
Hard and distrustful as I am, I yield.”

Penelope is also very beautiful and experienced at the loom, two additional fundamental qualities for an ancient Greek house-woman:

Reflecting to the queen the silver sounds.
With grief renew’d the weeping fair descends;
Their sovereign’s step a virgin train attends:
A veil, of richest texture wrought, she wears,
And silent to the joyous hall repairs.
There from the portal, with her mild command,

But most important of all she knows her place as a woman, as for instance when more than once she obeys to her son’s order to retire in her quarters and devote her to the loom and other womanly activities instead of disturbing the men’s feast:

Thus at first sight Penelope embodies all the qualities that a woman was supposed to have in accordance with the archaic – and then even classic – Greek lifestyle, tradition and social customs. Nevertheless there are several instances that reveal a different character, a perspective into which Penelope seems quite shady and to a certain extent more real and womanly than how she has been portrayed. Penelope is self conscious of her beauty and endowments and often uses them to flirt, perhaps just to satisfy her petty vanity, with her suitors:

Thus wailing, slow and sadly she descends,
On either band a damsel train attends:
Full where the dome its shining valves expands,
Radiant before the gazing peers she stands;
A veil translucent o’er her brow display’d,
Her beauty seems, and only seems, to shade:
Sudden she lightens in their dazzled eyes,
And sudden flames in every bosom rise;
They send their eager souls with every look.
Till silence thus the imperial matron broke:

Additionally she does not seem so firm in her decision of waiting for Odysseus to come back instead of marrying and starting a new life, as she simply confesses:

My mind, reflective, in a thorny maze
Devious from care to care incessant strays.
Now, wavering doubt succeeds to long despair;
Shall I my virgin nuptial vow revere;
And, joining to my son’s my menial train,
Partake his counsels, and assist his reign?

And meanwhile she is pondering as whether to get married again or not, she too often seems to manoeuvre and double cross her suitors, probably only out of female narcissism or perhaps purposely, by accepting gifts and exchanging messages with more than one of them, as Antinous says:

Accordingly also Athena warns Odysseus while he is still away on the disputable behaviour of his alleged loyal wife who is playing along with each of the suitors by sending messages to them all:

Moreover Penelope shows even some greed, when she solicits riches by lamenting the absolute lack of gifts that the suitors are instead, according to the tradition, supposed to bring since her wedding choice/date is approaching. This witty and soft reproach will induce the suitors to profuse themselves in precious gifts that she will immediately accept and store – instead of refusing with disdain:

I guess that perhaps to better understand this rather ambiguous character it should be taken in consideration the strong educational and moral weight and importance that Homer’s poems had to have on entire generations of ancient Greeks. This would probably explain in a cultural perspective that even a positive character as the multi-quality Penelope is nevertheless always a woman, and therefore someone to be sceptic about “by principle” according to Greek moral, experience and ethic. And in fact even Odysseus, the shrewdest man known, will reveal his own identity to his wife only at the very last: she will eventually know that her husband is back only after his father, his son, his swineherd and his wet-nurse have… and when he finally unveils she justifies her coldness and scepticism by saying:

Against the fondness of my heart I strove:
’Twas caution, O my lord! not want of love.

Should we believe her?