The Hemlock Cup. Socrates, Athens and the Search for the Good Life by Bettany Hughes, Random House Publ. ISBN: 978-1-4000-7601-7. We think the way we do because Socrates thought the way he did; in his unwavering commitment to truth and in the example of his own life, he set the standard for all subsequent Western philosophy. And yet, for twenty-five centuries, he has remained an enigma: a man who left no written legacy and about whom everything we know is hearsay. His life spanned “seventy of the busiest, most wonderful and tragic years in Athenian history.” Athens in the fifth century B.C. was a city devastated by war, but, at the same time, transformed by the burgeoning process of democracy. Drawing on the latest sources—archaeological, topographical, and textual—Hughes re-creates the streets where Socrates walked, to place him there, and to illuminate for us the world as he experienced it. She takes us through the great, teeming Agora—the massive marketplace, the heart of ancient Athens—where Socrates engaged in philosophical dialogue and where he would be condemned to death. We visit the battlefields where he fought, the red-light district and gymnasia he frequented and the religious festivals he attended. We meet the men and the few women—including his wife, Xanthippe, and his “inspiration” and confidante, Aspasia—who were central to his life. We travel to where he was born and where he died. And we come to understand the profound influences of time and place in the evolution of his eternally provocative philosophy..

Citizens to Lords: A Social History of Western Political Thought from Antiquity to the Middle Ages by Ellen Meiksins Wood, Verso Publ., ISBN 1844672433 – A major new history of Western political thought as it evolved through conflict and communities. In this groundbreaking work, Ellen Meiksins Wood lays out her innovative approach to the history of political theory and traces the development of the Western tradition from classical antiquity through the late Middle Ages. Her “social history” is a significant departure from other contextual interpretations. Treating canonical thinkers as passionately engaged human beings, Wood examines their ideas not simply in the context of political languages but as creative responses to the social relations and conflicts of their time and place. From the Ancient Greek polis of Plato and Aristotle, through the Roman Republic of Cicero and the Empire of St. Paul and St. Augustine, to the medieval world of Averroes, Thomas Aquinas and William of Ockham, “Citizens to Lord” offers a rich, dynamic exploration of thinkers and ideas that have indelibly stamped our modern world.

Philosophic Classics, Volume I: Ancient Philosophy (5th Edition), by Forrest E. Baird, Walter Kaufmann, Prentice Hall – ISBN 0132413175 – This fascinating anthology of classic philosophical readings provides clear translations of the most important Greek philosophers and some of their Roman followers, key influences on the development of Western civilization.  This book begins with the fragmentary statements of the Pre-Socratics, moves through the all-embracing systems of Plato and Aristotle, and culminates in the practical advice of the Hellenistic writers.  For anyone interested in owning a collection of clearly translated philosophical works.

Michael Oakeshott, the Ancient Greeks, and the Philosophical Study of Politics, by Eric S. Kos – Imprint Academic Publ. – ISBN 1845400755 – This work addresses a question fundamental for Oakshott throughout his life: What do people do when they read and discuss memorable work in the history of political thought. 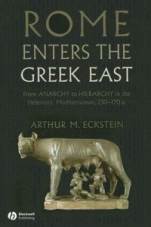 Rome Enters the Greek East: From Anarchy to Hierarchy in the Hellenistic Mediterranean, 230-170 BC, by Arthur M. Eckstein, Wiley-Blackwell Publ., ISBN: 1405160721. This volume examines the period from Rome’s earliest involvement in the eastern Mediterranean to the establishment of Roman geopolitical dominance over all the Greek states from the Adriatic Sea to Syria by the 180s BC. Applies modern political theory to ancient Mediterranean history, taking a Realist approach to its analysis of Roman involvement in the Greek Mediterranean. Focuses on the harsh nature of interactions among states under conditions of anarchy while examining the conduct of both Rome and Greek states during the period, and focuses on what the concepts of modern political science can tell us about ancient international relations. Includes detailed discussion of the crisis that convulsed the Greek world in the last decade of the third century BC. Provides a balanced portrait of Roman militarism and imperialism in the Hellenistic world. 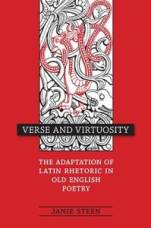 Verse and Virtuosity: The Adaptation of Latin Rhetoric in Old English Poetry, by Janie Steen, University of Toronto Press Publ. ISBN: 0802091571. While there is little evidence of formal rhetorical instruction in Anglo-Saxon England, traditional Old English poetry clearly shows the influence of Latin rhetoric. Verse and Virtuosity demonstrates how Old English poets imitated and adapted the methods of Latin literature, and, in particular, the works of the Christian Latin authors they had studied at school. It is the first full-length study to look specifically at what Old English poets working in a Latinate milieu attempted to do with the schemes and figures they found in their sources. Janie Steen argues that, far from sterile imitation, the inventiveness of Old English poets coupled with the constraints of vernacular verse produced a vital and markedly different kind of poetry. Highlighting a selection of Old English poetic translations of Latin texts, she considers how the translators responded to the challenge of adaptation, and shows how the most accomplished, such as Cynewulf, absorb Latin rhetoric into their own style and blend the two traditions into verse of great virtuosity. With its wide-ranging discussion of texts and rhetorical figures, this book can serve as an introduction to Old English poetic composition and style. Verse and Virtuosity, will be of considerable interest to Anglo-Saxonists, linguists, and those studying rhetorical traditions.

The Book of the Ancient Greeks. by Dorothy Mills, Dawn Chorus Press Publ., ISBN: 1597313815 – An introduction to the history and civilization of Greece from the coming of the Greeks to the conquest of Corinth by Rome in 146 bc. Miss Mills again makes history a vital thing and historians, statesmen, and poets of the ancient world living figures.

Poetic and Performative Memory in Ancient Greece: Heroic Reference and Ritual Gestures in Time and Space,by Claude Calame – Harvard University Press – ISBN: 067402124X. This volume shows how the Ancient Greeks’ collective memory was based on a remarkable faculty for the creation of ritual and narrative symbols.

An Introduction to Political Philosophy, by Colin Bird – Cambridge University Press – ISBN: 0521544823. A wide-ranging analysis of historical and contemporary figures, and various real-life examples. The book challenges readers to think critically about political arguments and institutions: a provocative text for any student of philosophy or political science.

The Development of Greek and the New Testament: Morphology, Syntax, Phonology, and Textual Transmission, by Chrys C. Caragounis – Baker Academic – ISBN: 080103230X.After the Erasmian pronunciation (1528) Greek was divided into ancient and modern, a division that led to the neglect of the later periods of the language, and the pronunciation applied made impossible the detection of many communicatory aspects and obscured many text-critical problems. The author argues for the unity of the Greek language from Mycenaean times to the present. The New Testament appears during the time of transition (335 B.C. – A.D. 565) from ancient to Modern Greek. Morphological and syntactical analysis shows that at many important points the New Testament can be elucidated by later Greek, up to Neohellenic.

Gardens of Philosophy: Ficino on Plato, by Arthur David Farndel, Shepheard-Walwyn, ISBN: 0856832405. Marsilio Ficino translated into Latin and commentated on the meaning and implications of key works by Plato (including 25 of Plato’s dialogues and 12 letters ascribed to the philosopher). The first English translation of Ficino’s works and provide an insightful glimpse into the philosophy that contributed to the Renaissance.

Byzantine Rome and the Greek Popes,by Andrew Ekonomou – Lexington Books – ISBN: 073911977X. Analysis and researches on Eastern Influences on Rome and the Papacy from Gregory the Great to Zacharias, 590-752 A.d.

The Cambridge History of Twentieth-Century Political Thought, by Terence Ball, Richard Bellamy Ed. – Cambridge University Press – ISBN: 0521691621: A Comprehensive overview of the development of political thought to the end of the twentieth century.

Origins of Democracy in Ancient Greece, by Kurt Raaflaub, Josiah Ober, Robert Wallace – University of California Press – ISBN: 0520245628 An updated and comprehensive study on the social and political context of the evolution of democracy. Five researchers deepen the pre-conditions and development of this wonderful historical experience.

The Origins of Theater in Ancient Greece and Beyond: From Ritual to Drama, by Eric Csapo, Margaret Miller – Cambridge University Press – ISBN: 0521836824.This volume is the most thorough examination on the origins of Greek drama to date.

A Companion to Greek Rhetoric, by Ian Worthington Ed. – Blackwell Publishers – ISBN: 1405125519.This companion guides readers towards a broad understanding of the origins, history and development of Greek Rhetoric.

A History of Ancient Greek: From the Beginnings to Late Antiquity, by A. Christidis Ed. – Cambridge University Press – ISBN: 0521833078.Comprehensive, authoritative and nevertheless highly accessible reference work essential for all those who are interested in the history of Greek.