Much has been said, discussed and written about myth, its origins and its development, especially – but not exclusively – Greek and then Roman; as well as many are the scientific, sociological and psychological approaches that scholars, scientists, artists, philosophers and thinkers have adopted for its interpretation and explanation. 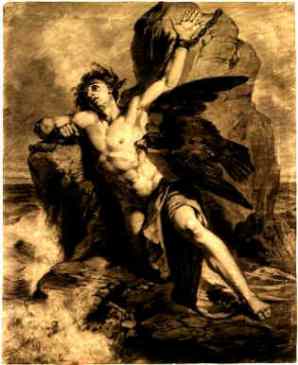 Interesting are the etiological attempts to describe and justify myths and the ethnographical analysis of the relationship between myth and nature, or myth and magic for instance has brought forth fascinating results from the anthropological point of view, some of which to a certain extent could be also applicable for interpretation to other communities; as Bronisław Malinowski noticed by observing the culture and death rituals of the inhabitants of Trobriand Isles:

“There is very often a myth at the bottom of a certain system of magic, and a myth is always local…
In all Kiriwinian [the natives] magic a great role is played by myths, underlying a certain system of magic, and by tradition in general…. The ancestral names mentioned in the several formulae form therefore one of the traditional elements so conspicuous in general. The mere sanctity of those names, being often a chain linking the performer with a mythical ancestor and originator, is in the eyes of the natives a quite sufficient prima facie reason for their recital. Indeed, I am certain that any native would regard them thus in the first place, and that he would never see in them any appeal to the spirits, any invitation to the baloma [spirit] to come and act; the spells uttered whilst giving the ula’ula [fee paid for the magic] being, perhaps, an exception. But even this exception does not loom first and foremost in his mind and does not color his general attitude towards magic.”

Notwithstanding these efforts, researches and achievements the whole question is still to be considered only partially solved as Arnaldo Momigliano clearly wrote:

It is remarkable to notice that not all this production belongs to the modern age, as this intriguing topic has started quite soon to attract attempts to its own rationalisation. In the beginning of Plato’s dialogue Phaedrus, Socrates and Phaedrus stroll through the outskirts of Athens, nearby the river Ilissus, and lie down in the shade under a huge old tree. This outdoor enchanting scenario is minutely described, something unwonted for that kind of compositions and in that age, possibly just in order to stimulate the commencement of the following dialogue on myth and its origins:

PHAEDRUS: I should like to know, Socrates, whether the place is not somewhere here at which Boreas is said to have carried off Orithyia from the banks of the Ilissus?

SOCRATES: Such is the tradition.

PHAEDRUS: And is this the exact spot? The little stream is delightfully clear and bright; I can fancy that there might be maidens playing near.

SOCRATES: I believe that the spot is not exactly here, but about a quarter of a mile lower down, where you cross to the temple of Artemis, and there is, I think, some sort of an altar of Boreas at the place.

PHAEDRUS: I have never noticed it; but I beseech you to tell me, Socrates, do you believe this tale?

SOCRATES: The wise are doubtful, and I should not be singular if, like them, I too doubted. I might have a rational explanation that Orithyia was playing with Pharmacia, when a northern gust carried her over the neighbouring rocks; and this being the manner of her death, she was said to have been carried away by Boreas. There is a discrepancy, however, about the locality; according to another version of the story she was taken from Areopagus, and not from this place. Now I quite acknowledge that these allegories are very nice, but he is not to be envied who has to invent them; much labour and ingenuity will be required of him; and when he has once begun, he must go on and rehabilitate Hippocentaurs and chimeras dire. Gorgons and winged steeds flow in apace, and numberless other inconceivable and portentous natures. And if he is sceptical about them, and would fain reduce them one after another to the rules of probability, this sort of crude philosophy will take up a great deal of time. Now I have no leisure for such enquiries; shall I tell you why? I must first know myself, as the Delphian inscription says; to be curious about that which is not my concern, while I am still in ignorance of my own self, would be ridiculous.

Thus when asked about the right location of the myth of Boreas – as its truth is rather meekly questioned to Phaedrus – Socrates proves he knows the traditions and myths as every man of his times was supposed to, moreover he actually finds those mythological stories and characters lovely and fascinating and yet their creation and strenuous enrichment and update a very painstaking job, besides rather worthless to him whose main interest is human nature investigation:

“And therefore I bid farewell to all this; the common opinion is enough for me. For, as I was saying, I want to know not about this, but about myself: am I a monster more complicated and swollen with passion than the serpent Typho, or a creature of a gentler and simpler sort, to whom Nature has given a diviner and lowlier destiny?”

Apart from stating his true exploratory interests, Socrates, son of Athens of V century B.C. plainly shows this innovative – though having forerunners among some older Ionian thinkers – tendency to analyse myths under a different perspective, more ethic and aimed at rationality. This new horizon widens right in concomitance with the sunset of the classic Greek culture, a very critical phase of a civilisation that by some means had lost quite a few of its moral and ethical pillars and started seeking for new ones. To a certain extent this stage is not so distant from our own days where a palpable lack of certainties and the consequent spasmodic and ill-concealed quest for new steady points of reference is repeatedly creating new, though often ephemeral, true or false yet necessary myths. Decidedly I am inclined to believe in accordance with Jung that, regardless the level of rationality achieved even by modern societies, myths are still a considerable essential element of psychological and social stability. Ultimately, as an acute author whom I love has brilliantly stigmatised: