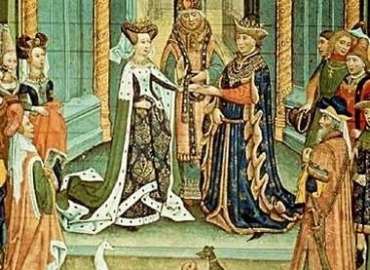 The death of Philip II of Macedonia is permeated by particularly mystifying circumstances and most likely was only partly influenced by previous events occurred a few years before and more likely due to political and dynastical motives. According to the tradition a Macedon nobleman Pausania (one of Philip’s bodyguards) had profoundly offended a young man who, in consequence to the humiliation had taken his own life. In vengeance one of his friends, Attalus, was behind a serious degrading offence against Pausania. When Pausania demanded justice to Philip II, being the king related to Attalus he did not executed any punishment and limited his intervention by trying to sooth Pausania’s rage with significant gifts. Unfortunately Philip did not realise the vindictive temperament of his safeguard as in 336 b.C. during his daughter’s wedding Pausania murdered his king. Diodorus reports in fact:

“Pausanias, nevertheless, nursed his wrath implacably, and yearned to avenge himself, not only on the one who had done him wrong, but also on the one who failed to avenge him. In this design he was encouraged especially by the sophist Hermocrates. He was his pupil, and when he asked in the course of his instruction how one might become most famous, the sophist replied that it would be by killing the one who had accomplished most, for just as long as he was remembered, so long his slayer would be remembered also.

Pausanias connected this saying with his private resentment, and admitting no delay in his plans because of his grievance he determined to act under cover of the festival in the following manner.

He posted horses at the gates of the city and came to the entrance of the theatre carrying a Celtic dagger under his cloak. When Philip directed his attending friends to precede him into the theatre, while the guards kept their distance, he saw that the king was left alone, rushed at him, pierced him through his ribs, and stretched him out dead; then ran for the gates and the horses which he had prepared for his flight”.

In truth the preliminary accident seems to have happened years before the king’s homicide, thus apparently Pausanias had lingered quite a while before pursuing his reprisal; coincidentally – is it truly a coincidence?  As it seems that the murder occurred in a crucial moment for Alexander to take over and become then The Great. By the by, there is no trace of a sophist named Hermocrates, unless this character coincides with an effective syntactician of that age. Actually, in spite of Diodorus’ reticence, Justin in his Epitome of Pompeius Trogus, makes a specific reference to a conspiracy in murder involving Philip’s first wife Olympias and their son Alexander who shared their worries after Philip’s new marriage with Cleopatra and  thus perpetrated remarkable atrocities:

“It is even believed that he was instigated to the act by Olympias, Alexander’s mother, and that Alexander himself was not ignorant that his father was to be killed; as Olympias had felt no less resentment at her divorce, and the preferment of Cleopatra to herself, than Pausanias had felt at the insults which he had received. As for Alexander, it is said that he feared his brother by his step-mother as a rival for the throne; and hence it happened that he had previously quarrelled at a banquet, first with Attalus, and afterwards with his father himself, insomuch that Philip pursued him even with his drawn sword, and was hardly prevented from killing him by the entreaties of his friends. Alexander had in consequence retired with his mother into Epirus, to take refuge with his uncle, and from thence to the king of the Illyrians, and was with difficulty reconciled to his father when he recalled him, and not easily induced by the prayers of his relations to return. Olympias, too, was instigating her brother, the king of Epirus, to go to war with Philip, and would have prevailed upon him to do so, had not Philip, by giving him his daughter in marriage, disarmed him as a son-in-law. With these provocations to resentment, both of them are thought to have encouraged Pausanias, when complaining of his insults being left unpunished, to so atrocious a deed. Olympias, it is certain, had horses prepared for the escape of the assassin; and, when she heard that the king was dead, hastening to the funeral under the appearance of respect, she put a crown of gold, the same night that she arrived, on the head of Pausanias, as he was hanging on a cross; an act which no one but she would have dared to do, as long as the son of Philip was alive. A few days after, she burnt the body of the assassin, when it had been taken down, upon the remains of her husband, and made him a tomb in the same place; she also provided that yearly sacrifices should be performed to his manes, possessing the people with a superstitious notion for the purpose. Next she forced Cleopatra, for whose sake she had been divorced from Philip, to hang herself, having first killed her daughter in her lap, and enjoyed the sight of her suffering this vengeance, to which she had hastened by procuring the death of her husband. Last of all she consecrated the sword, with which the king had been killed, to Apollo, under the name of Myrtale, which was Olympias’s own name when a child. And all these things were done so publicly, that she seems to have been afraid lest it should not be evident enough that the deed was promoted by her”.

Even Plutarch, albeit in a more telegraphic style, corroborates this theory:

“The assassin was Pausanias, who was angry because Philip had refused to give him justice for some injury done to him by Attalus.  But it was Philip’s wife who was the instigator. Olympias took this enraged young man and made him the instrument of her revenge against her husband. Once Philip was out of the way, Olympias tortured her hated young rival, Cleopatra, to death. So, at the age of only twenty, Alexander became king of Macedonia.”

In addition Alexander, to throw into disarray any potential accuser, distinctly directed towards the Persians the suspicions of having arranged the plot; as can be read in a letter reported by Arrian from Alexander to the Persian king Darius that:

As narrated by Plutarchus, Philip’s assassination was interpreted by the Athenians as a good omen as they felt freed from the threat hovering over their territories, but, as history has subsequently taught this was the very sad beginning of the irreparable end of classic Greece.

“Demosthenes had secret intelligence of the death of Philip, and laying hold of this opportunity to prepossess the people with courage and better hopes for the future, he came into the assembly with a cheerful countenance, pretending to have had a dream that presaged some great good fortune for Athens; and, not long after, arrived the messengers who brought the news of Philip’s death. No sooner had the people received it, but immediately they offered sacrifice to the gods, and decreed that Pausanias should be presented with a crown”.

Yet not only the suspect murderers seem to deserve attention and hideous comments from the historians, as Plutarch deplores also the conduct of Demosthenes under this specific circumstance:

“Demosthenes appeared publicly in a rich dress, with a chaplet on his head, though it were but the seventh day since the death of his daughter, as is said by Aeschines, who upbraids him upon this account, and rails at him as one void of natural affection towards his children. Whereas, indeed, he rather betrays himself to be of a poor, low spirit, and effeminate mind, if he really means to make wailings and lamentation the only signs of a gentle and affectionate nature, and to condemn those who bear such accidents with more temper and less passion. For my own part, I cannot say that the behaviour of the Athenians on this occasion was wise or honourable, to crown themselves with garlands and to sacrifice to the gods for the death of a prince who, in the midst of his success and victories, when they were a conquered people, had used them with so much clemency and humanity.”

It is hardly conceivable – and even otiose – what would have occurred to the destiny of Greece, Asia and Europe if Philip had not been assassinated. Yet his personality and greatness seemed coupled with more wisdom and moderation than his son Alexander, and perhaps, perhaps the history and geography of Greek poleis would have been quite different. Again Diodorus:

“Such was the end of Philip, who had made himself the greatest of the kings in Europe in his time, and because of the extent of his kingdom had made himself a throned companion of the twelve gods. He had ruled twenty-four years. He is known to fame as one who with but the slenderest resources to support his claim to a throne won for himself the greatest empire in the Greek world, while the growth of his position was not due so much to his prowess in arms as to his adroitness and cordiality in diplomacy.

Philip himself is said to have been prouder of his grasp of strategy and his diplomatic successes than of his valour in actual battle. Every member of his army shared in the successes which were won in the field but he alone got credit for victories won through negotiation”.