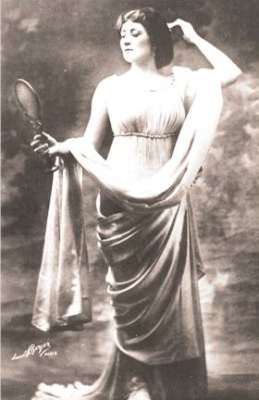 As some of my readers have correctly pointed out, not all the courtesans were as kind-hearted and noble souls as Glycera – and this is obviously common sense corroborated by facts… In truth very many are the examples of  such greedy and unscrupulous women which can be found in ancient literature, actually – for the records… – they unquestionably exceed in number the loving and tender-hearted ones. Both ancient Greek and Latin literature profusely portray all different kind of concubines and prostitutes, often by stressing particularly in sarcastic and condemning tones their insatiability for richness, their absolute lack of scruples and their moody disposition and whimsical attitude.

Admittedly though, to their excuse, it must be said they were normally initiated to their art from a very young age often because of financial restraints, as Lucian of Samosata depicts in this following mime between mother Crobyle and daughter Corinna:

CROBYLE: … I want to instruct you how you should behave with men. Take my oath daughter, we have only your favour with men to depend upon for our living. You can’t figure how tough it has been for us to survive since your good father’s death. We lacked nothing when he was alive. He had quite a standing as a blacksmith in the Piræus. Everyone says there will never be another blacksmith like Philipinos. After his death I traded his pincers, forge and hammer for two hundred drachmas. We have lived on that for quite a while. I’ve found a job knitting and turning thread, earning just enough to buy us some bread. I have raised you, however, my beloved little daughter. You are the only hope that is left to me… you will earn a lot of money by being caring to nice young men, drinking in their company and sleep with them – this for money, obviously.

CORINNA: (Scandalized): You imply like Lyra, the daughter of Daphnis?

CORINNA: But she is a courtesan!

CROBYLE: So what? There is no mischief in that. You will become wealthy. You are sure going to have many lovers.

And often in their adolescence, as Alciphron reports in this letter below, they had to fight against their own feelings in so much as the reasons of the heart were eventually defeated by plain financial calculations and crude survival necessities:

“Oh Mother, I am at my wit’s end! It is impracticable for me to marry the young Methymnaean, the pilot’s son, to whom my father recently engaged me, since I have seen this young man from the city, who carried the holy palm branch, when you gave me authorization to go to Athens for the celebrations of the Oschophoria. Ah, mother, how gorgeous he is! how attractive! His locks are curlier than moss; he laughs more agreeably than the sea in a calm; his eyes are cerulean, like the ocean, when the first beams of the rising sun shine upon it. And his whole countenance? You would say that the Graces, having abandoned Orchomenus [city in Beotia], after bathing in the fountain of Gargaphia, had come to frolic around his cheeks. On his lips blossom roses, which he seems to have plucked from Cytherea’s bosom to decorate them. He must either be mine, or, following the example of the Lesbian Sappho, I will throw myself, not from the Leucadian rocks, but from the crags of Piraeus, into the waves.”

And again on the same theme of the conflict between convenience and sentiments Lucianus of Samosata portrays in this dialogue a true lecture of scepticism given by this experienced mother to her too candid – alas! Not for too long I am afraid… – daughter:

MOTHER. …You see how much this boy is bringing us? Not one obol, no clothing, not a pair of sandals, not even a vase of cream has he ever given you; it is all oaths and promises and future prospects; always: “should my father die I shall inherit and everything would be yours”. And thus – as you say – he swears you will become his wife.

MUSARIUM. Oh yes, mother, he swore it, by the two Goddesses and Polias.

MOTHER. And you believe him, without doubt!? So much that the other day, when he had a payment to perform and nothing to pay with, you just gave him your ring without even consulting me, and its value just became drink…

MUSARIUM. He is so beautiful with his smooth chin; and he loves me, and weeps telling me that; and he is the son of Laches the Areopagite and Dinomache; and we shall soon become his real wife and mother-in-law, you know; we have great prospects, if only the old man would kick the bucket.

MOTHER. …They [Musarium’s girlfriends] have more common sense; they know their trade better than to link their faith to the worthless words of a boy with a taste for lover oaths. But you go in for faithfulness and true love, and will have nothing to say to anybody but your Chaereas. There was that farmer from Acharnae the other day; his chin was smooth as well; and he brought us the two minae he had just obtained by selling his father’s wine; but you, oh no sir! You sent him away with scorn; nobody but your Adonis for you….Do you expect to be eighteen all your life Musarium? or that Chaereas will keep his promises once has his patrimony, and his mother finds a match that will bring him another one? You don’t believe he will keep in mind his tears and kisses and promises, with five talents of dowry to distract him.

MUSARIUM Mother, you could not expect me to betray Chaereas and let that horrible worker (yak!) approach me. Poor Chaereas! he is my baby and my pet…

MOTHER. I only hope this all will be true. I shall jog your memory about this when the time comes.

Well, so far the heart seems still to be there. Nonetheless later in their years either pushed by the adversities of their trade and by the difficulties of everyday life, or simply by the growing greediness for a luxurious life, or more likely by the uncertainties of their future associated to the unstoppable sunset of their beauty and the unavoidable decadence of their “body assets”, these women were able to touch the deepest forms of cynicism and behave in the rudest materialistic conduct, as it is depicted in this courtesan’s “blunt” letter (composed by Alciphron) – where she is refusing any further contact with this unlucky and financially ruined lad:

“Why do you waste your time writing me so often? I want fifty gold pieces, not letters. If you do love me, well give them to me; but if you are too attached to your money, don’t bother me. Farewell.”

And especially this other rather “scary” letter, again composed by one of Alciphron’s courtesan-personages in response to a marvellous heart-breaking, full of tears love letter of her unfortunate, sincere, but now “bankrupt”, lover :

“How I wish that a woman’s household could be maintained on tears! I should live majestically, for I know you would keep me lavishly supplied with them; but, as it is, unhappily we want cash, garments, ornaments and maids. Our activities rely exclusively upon this. I have no estates at Myrrhinus, no split in the silver mines; I only depend upon the little gifts I am given, and the favours of silly lovers, squeezed from them with many moans and tears. I have known you now for more than one year, and I am no better for it. My hair is awful; it has not seen any oil all this time. I only wear one Tarentine tunic, so aged and tattered that I am absolutely embarrassed to be seen in it by my friends. I hope I may have better luck! And do you think that, while I stand by you, I shall be capable to find other resources? You weep; be sure that won’t last long. But I shall be fairly starving, unless I can discover a lover to give me something. I question your tears: how ridiculous they are! O Aphrodite! You say, Simalion, that you are crazy in love with a woman, and that you cannot live without her. Well, my friend, have you no precious drinking-cups at home? Has not your mother some jewels? Cannot you get some values belonging to your father? How lucky is Philotis! The Graces have bestowed her with favours. What a great lover she had in Meneclides, who each day presents her with something. That is way better than your tears. And me miserable girl, I have no lover, but a rented mourner, who sends me nothing but flowers and garlands, just like I was to beautify an early tomb for me, and proclaims that he cries all night. Well if you can bring me anything, come and meet me, but please — no tears. Or else, keep your sorrow to yourself, and stop bothering me.

However it is remarkable how avid ruthless women and weak pathetic lovers are to be found throughout literature of all times. Very explicit and hopelessly straightforward, sound the appalling words of the late XIX century Viennese courtesan Josephine Mutzenbacher portrayed by Felix Salten:

“If you consider a year has 365 days, and calculating at least three men a day, you get around one thousand and one hundred men a year, thus over thirty thousands in three decades. Quite an army… You cannot pretend I can account for each of those “brushes” who “dusted” me… Ultimately love is a stupid thing. A woman resembles an old fipple pipe, with only a couple of holes from which you can get only two, three notes.”

Naturally a magisterial example of the power exercised by greedy cold-blooded women is Nana – it is simply unforgettable her pitiless conduct and voraciousness for all the riches of Paris pursued by exploiting every single inch of her natural “endowments” and every penny of her ill-fated lovers:

“This was the period of her life when Nana lit up Paris with redoubled splendour. She rose higher than ever on the horizon of vice, dominating the city with her insolent display of luxury and contempt of money which made her openly squander fortunes. Her house had become a sort of glowing forge, where her continual desire burned fiercely and the slightest breath from her lips changed gold into fine ashes which the wind swept away every hour. Nobody had ever seen such a passion for spending. The house seemed to have been built over an abyss in which men were swallowed up – their entire possessions, their bodies, their very names – without leaving even a trace of dust behind them.”

And how to forget the frightful, bitter and dry sense of power and self-contemptuousness of Madam Michèle de Burne, when another unfortunate victim falls into her cage?:

“Fathers devoted their lives to their businesses and labours, families devoured one another on the pretext of trade, only to be robbed by their sons who, in turn, allowed themselves to be fleeced by women who posed as sweethearts to obtain their money. In all Paris, from east to west and from north to south, there existed an unbroken chain of female tricksters, a system of organized theft, and all because, instead of satisfying men at once, these women were skilled in the subterfuges of delay.”

Apparently altogether quite a dismaying scenario; thus, along with old wise Monsieur Lamarthe, it can only be simply acknowledged and always born in mind: